Well I didn’t get a chance to participate in the Foodie Pen Pals program in August. There was too much going on and I decided I wouldn’t have enough time to go shopping and get a package in the mail. I didn’t want to disappoint anyone because I always look forward to get my package every month. I was pretty much resigned to getting the usual bills, bills and more bills, maybe with the occasional flyer thrown in. And then I came home the other day and found a box from The Spice Trader addressed to me with my name on it.

For those of you who don’t know, The Spice Trader  is a specialty shop in downtown Toronto that carries a large selection of organic spices and salts. The spices sold here are a little more than what you would pay for in a traditional grocery store. So why pay more? Remember, not all spices are created equal and you do get what you pay for. That said, I rarely buy spices from specialty stores because of the prices so this package was an extra special treat. Big thanks to my friend Debra for thinking of me! It was completely unexpected and I can’t stress enough how awesome a surprise it was! 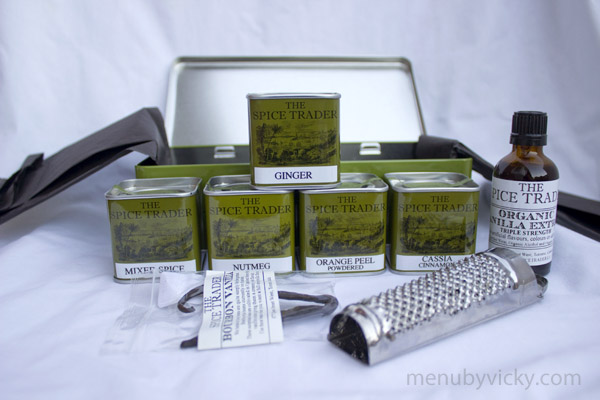 The spices are individually packaged into their own airtight containers and then neatly packed into a larger metal box. This is perfect for someone like me who’s slightly disorganized. When I first opened the larger box, I inhaled this lovely scent from all the spices in the box. The smell was like a cross between that of warm cider and cinnamon buns. The spices that were included were whole nutmeg, cassia cinnamon, powdered orange peel, mixed spice and ginger along with a bottle of vanilla, vanilla bean pods and a grater.

The spices smell almost too good to use, but also too good not to use! When I get back from vacation, I’ll have to think up some recipes to use these spices in. Thanks again Debra!