The Toronto Pearson Runway Run 5K was held this morning on June 23, 2012. I was going to ask how often do you get to run at the airport, but I think I know the answer to that question. The best part about this race is that you’re not carrying a 20 pound suitcase trying to make it to your gate on time: you’re out on the tarmac and planes are landing and taking off as you run. How cool is that? The money raised from the race goes to a great charity –  Hope Air which helps financially disadvantaged Canadians make travel arrangements for specialized health care.

I was concerned about the race starting at 9AM but was happy to see the weather cooled down quite a bit. The sun was out but the humidity was almost gone. Hooray for being able to breathe again after having the city under an extreme heat alert for the past several days. 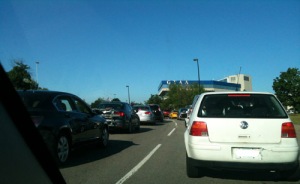 Race participants were held at an airport maintenance garage where the opening ceremonies would take place and the bib/race kit pick ups were located. I was disappointed that I didn’t get a shirt in my size. The volunteers said they only had mediums and large sizes left. Oh well. The race kit came in a small reusable shopping bag and had a few fliers along with a snack pack of trail mix. I had enough time to put on some sunscreen, warmup and use the porta-potties before starting.

The 5K participants were escorted out to the runway just before 9AM. The announcer said a few words (which I couldn’t hear) and the race started. The race was a loop around runway 24L/6R – lots of room to spread out and run or walk and the bonus was that it was flat. I finished in 28:48 which was not bad considering I was having ankle issues. Not much else to say: at 5K, it was over and done with pretty quickly!

The post-race food was pretty nice! In fact, it was better than most half marathons I’ve done. They had the usual bagels, apples, bananas, but they also had full-sized packages of M&Ms, cookies and more of the trail mix packages that we got in the race kit. Cool!

Aside from the traffic getting into the parking lot, I’d say the event was well organized and lots of fun. It also supports a great charity. If you’ve ever wanted to run beside planes taking off and landing, be sure to register for this race next year.